The Story of our EDaN Village Signs 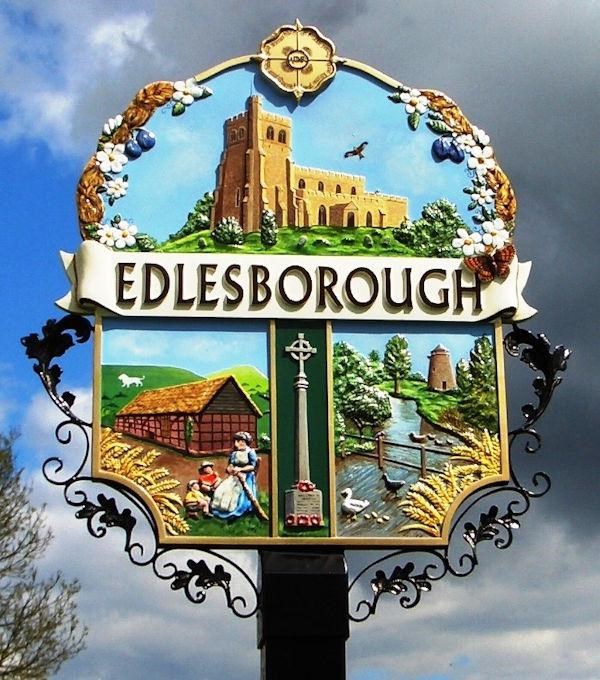 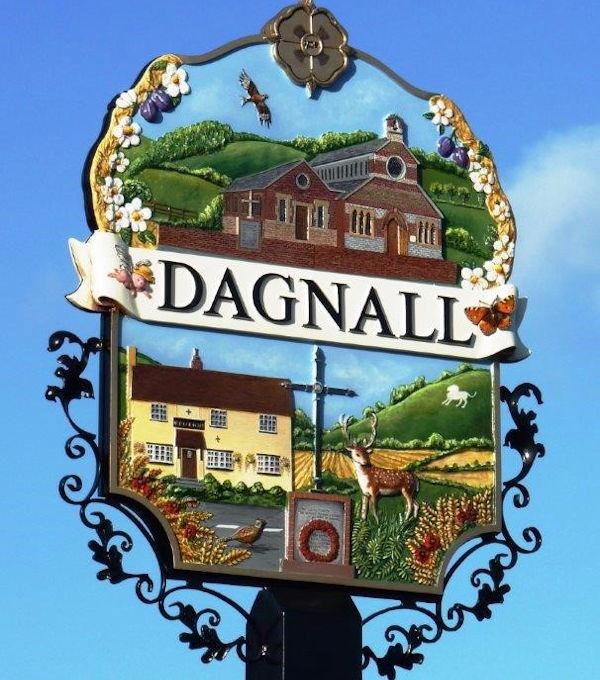 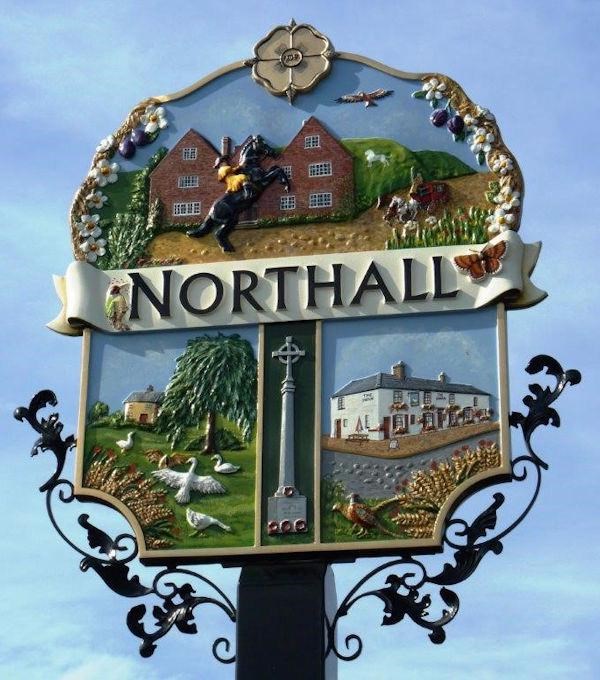 Following the publication of the Edlesborough Parish Village Plan in 2008, initiated by the Parish Council, the EDaN (Edlesborough Dagnall and Northall), Beautification Team was formed as one of several actions teams. Its purpose was to bring about various improvements from the community's wish lists included in the plan.

Following various fund-raising events, including a Firewalk and Mayday Celebrations, plus financial input from the Parish Council, the team set about designing, and installing signs for each of the three villages.

Sitting proudly atop all the signs is the unique Edlesborough Rose Brass, wrought in remembrance of Sir John Killingworth, who died in 1412. After spending four centuries over his grave in St. Mary the Virgin, Edlesborough, it was removed to Pitstone during church repairs and then to the chapel in Ashridge House, before being reinstated in our church in 1925. In the 1980's it was removed for safe keeping to a bank vault in Bedford, following the theft of the 'Knight's Brass' - so well travelled. Literal translation from the inscription on the rose reads:

Flanking the rose are straw plaits, the making of these a very lucrative former trade, employing women and children from all three villages and sold to the Dunstable and Luton hat factories. The prune plums were sent in baskets by pony and trap to nearby Stanbridgeford railway station where they were carried on the 'Dunstable Flyer' to London and used to dye sailors' uniforms in the 19th century.

The rare Duke of Burgundy butterfly feels quite at home in our villages, sometimes commuting to Totternhoe Knolls or The Beacon. You can see the red kite soaring over our prominent buildings – now a familiar sight in the parish's countryside. The Whipsnade lion, cut into the chalk of Bison Hill, appears in all the scenes. Also depicted are our war memorials, a reminder of the ultimate sacrifice made by our village lads in both world wars. A sobering touch for our beautiful signs.

The Edlesborough sign depicts our magnificent church on the hill - a natural chalk hillock or ancient burial mound? The original part of the church, built in the 13th Century from the locally dug stone, Totternhoe clunch, has been added to and embellished over the years. The tower is now minus its wooden spire, lost to the fire of 1828 following a lightning strike. The fire burned ferociously for days and the bells were transported to London to be recast.

Our straw plaiter, instructing children in her craft, is seated in front of the 16th Century tithe barn. The highwayman 'Old Leather Britches' may be heard by the sharp-eared some dark nights still galloping his horse round nearby Church Farm moat, where soldiers dragged him from his hiding place in the stables to the gibbet on Ivinghoe Beacon. The barn would store 10% of the parish harvest in payment to the church, hence the ability to build and support such an impressive place of worship. To the right is Edlesborough ford, showing the old mill and the variety of wildfowl to be seen here. This stream is the county as well as the parish boundary with Bedfordshire. The sign is surrounded by a flower planter, kindly funded by the Edlesbray Players and enjoyed by visitors to our idyllic village green, once fully enclosed to allow villagers to graze their animals in times past. The sign was unveiled Mayday 2010 by our May Queen, assisted by the Green Man.

Dagnall's sign highlights All Saints' Church. It is now 150 years old and welcomes both Anglican and Methodist worshippers. The eaves ring to the voices of Dagnall Community Choir as the thriving group, attended by singers from three counties, practise their varied repertoire every Monday evening. The Red Lion pub, the last in Dagnall, is well supported by the community and is a welcome sight to thirsty travellers looking forward to 'proper' beer from a traditional village pub.

The beautifully situated village of Dagnall nestles between Dunstable Downs and the Ashridge Estate in Hertfordshire - Areas of Outstanding Natural Beauty. Quite often deer can be seen running beside the stretch of road from Dagnall to Edlesborough when they roam from the estate. The final portrayal of Dagnall's fame is credited to the vast pig farm selling top quality pork and the flying pig sporting a straw hat alludes to the nearby hat trade supplied with plaits for boaters in years past. The sign is surrounded by a circular teak bench, a memorial to local farmer Michael Price and Anne Thompson, chair of Edlesborough Parish Council, both sadly missed. Our MP, John Bercow, Speaker of the House of Commons, kindly unveiled our new sign in December 2011.

The Northall sign shows Butler's Manor, which was first mentioned in 1302. The current house dates in part from the early 1600's and is a good example of a double island moated site. Most of these sites date from the medieval period and were built for prestige and fish farming, not for defence. It is local legend that Dick Turpin watched from the attic room for coaches to plunder, riding out to waylay wealthy travellers on Black Bess.

The green woodpecker is more often heard than seen, with his laughing call and power-drill tapping. Pratt's Farm supplies us with goose, duck and quail eggs, the former noisily 'strutting their stuff' when strangers approach – especially near Christmas! The Swan pub is a popular local attraction, with fabulous displays of hanging baskets welcoming passers-by in for a bevy and a bite. The sign is sited in Knolls View Amenity Land and surrounded by a large raised flower bed. Behind this are benches and a wild flower meadow, creating a welcoming space for Northall folk and visitors alike. This sign was also unveiled by John Bercow in October 2011.

All three signs were crafted by artisans at 'The Signs of the Times' in Tebworth, Bedfordshire. Following our sketches and photographs, they translated our designs using wood, clay, steel, polyurethane and paint into the magnificent signs we all enjoy today. RS Engineering in Stanbridge tooled the ironwork and the sturdy metal posts supporting these heavy signs, which will grace our beloved villages for many years to come. Notelets displaying the signs are available locally. 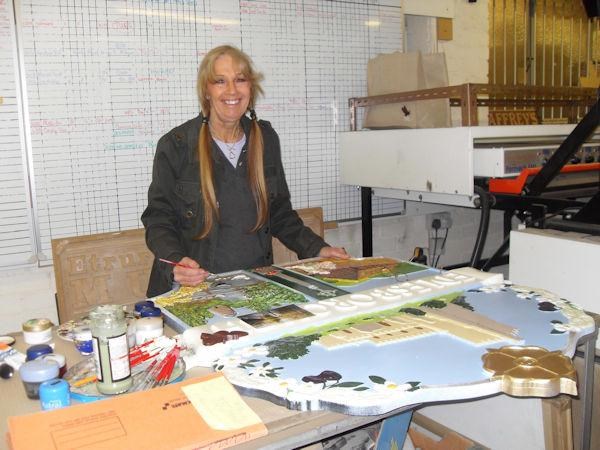 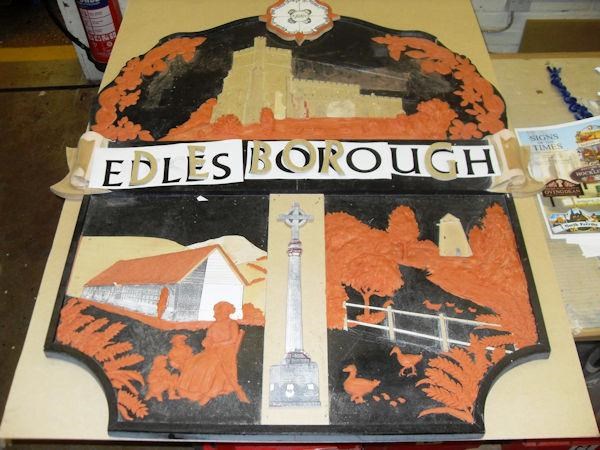 This article was written by Mrs Christine Yates, Chair of the EDaN Beautification Team

To view the original report with additional photos, please see:
The Story of our EDaN Village Signs

The Story of our EDaN Village Signs was published on August 4, 2014

All photographs reproduced with permission.